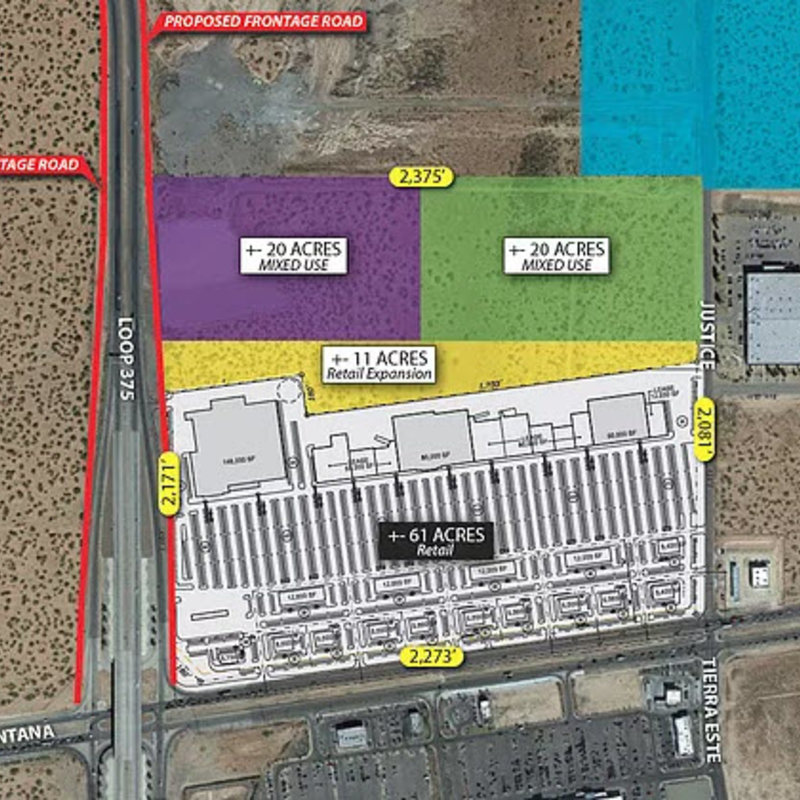 Two years ago, three pioneering landowners went public with plans to build El Paso’s first “urban villages” – test beds for a new type of development recently favored by city government. The news was considered a breakthrough for the city, which had struggled to convince developers that “smart growth” was a better way to build. Developers said smart growth was too expensive and El Pasoans wouldn’t buy it, while city officials argued suburban sprawl was unsustainable. Now one of those pioneering landowners, Cesar Viramontes, is selling the land where he had hoped to build a smart growth community called El Cruzer. Local retail giant River Oaks Properties is under contract to purchase the large property, more than 200 acres, in Far East El Paso. Now barren desert, the land is located at the intersection of Loop 375 and Montana. “It is a great piece of real estate. The proximity of Fort Bliss and the growth of Far East El Paso fits in with everything else we are doing out there,” says River Oaks president Adam Frank. Whether River Oaks would seek to zone the land smart code hasn’t been decided, Frank says. But he added, “smart growth is definitely challenging.”

The River Oaks development would be called Town Center on the Loop, according to Frank. Fifty acres would be developed into a “power center” with big box retail and the rest single-family homes and apartments. The purchase price has not been disclosed, but the buy is a big one for the local retail giant. Frank says he hopes to close on the deal in the next couple months.

Viramontes, perhaps best known for his jean washing business back when El Paso was sometimes called the blue jeans capital of the world, had envisioned an ambitious, $367-million urban village on the land. It was to have all the marks of a smart growth development. It was going to be a place where residents would not need cars to get from their homes to a grocery store, coffee shop, restaurant or bar. Kids could walk to school, and there would be plazas, parks, wide sidewalks, tree-lined trails and “green space.” Homes would have front porches, multi-story buildings would abut roads and mix retail, apartments and office space. Nothing like it had been built before in El Paso. The city awarded the project, along with two other smart-growth developments, tax incentives totaling $18 million two years ago. Then architects drew up the initial designs and Viramontes went hunting for a developer and retailers. “The city wants (smart growth) and is providing all kinds of incentives, but developers and retailers aren’t buying it,” Viramontes says.

He struggled to find a developer in El Paso, or even an out-of-town developer, that would take on the project, and interest from retailers was tepid. “We love the idea, we love the concept, but it has been very hard. It’s hard to be the guinea pig, being the first at anything,” says Viramontes’s son Aaron, who is also involved with the project. The tax incentives the city and county offered Viramontes expired in November, according to the city’s director of development Mathew McElroy. “However, they can work to come into compliance and staff would support going back to (City Council) and (Commissioner’s Court),” McElroy says. Last week, River Oaks began talks with city officials about incentives, according to Frank.

Meanwhile, EPT Land Communities is developing El Paso’s first smart-code zoned urban village on the Westside. When finished, the $777-million urban village named Montecillo will extend from Mesa Street to Interstate 10 between Castellano and Festival Drives. Construction just finished on the 293-acre development’s first buildings, a complex that mixes apartments with retail. And construction has just started on an active senior living community called The Retreat. On Wednesday, Alamo Drafthouse Cinemas announced it would open a movie theater in the Montecillo development. It will anchor Montecillo Town Center, which will be the development’s entertainment district. Alamo Drafthouse movie theaters are known for their unique combination of movie theater, restaurant and bar. Moviegoers can order food and drinks before or during movies and servers return with food as quietly as a “ninja,” according to the company.