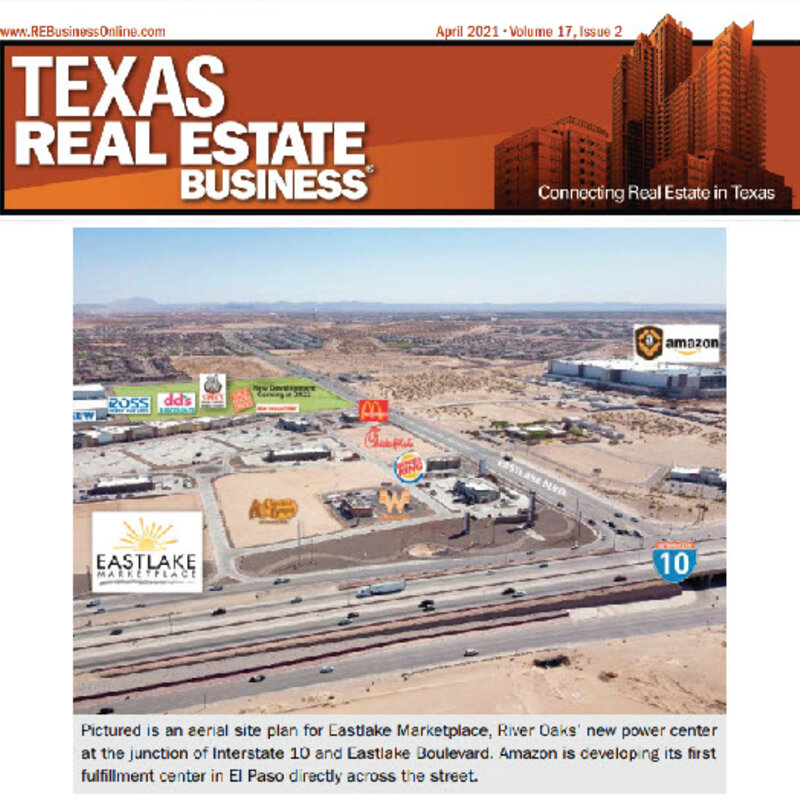 As one of the sector’s largest owners and developers, we have been witness to a number of uplifting and heartbreaking outcomes wrought by COVID-19 in the El Paso retail market over the last year.

In some cases, these efforts have helped tenants keep their doors open. In others, the economic impacts of COVID-19 ultimately hit the employee bases and operating budgets of tenants — especially those of the mom-and-pop variety — too harshly for them to survive.

But through the good, bad and universally unprecedented challenges of 2020, we have seen one category of retail — food and beverage — position itself as the clear leader in the recovery and inevitable return to growth of the broader El Paso market.

As is often the case during economic downturns, the grocery sector has performed well over the past year, with both large- and small-format players looking to expand in El Paso. River Oaks is currently under construction on a new store for Albertsons at Pebble Hills Boulevard and North Zaragoza Road on the city’s east side that will be the Idaho-based grocer’s largest in the region.

One of the biggest advantages this market has leaned on over the past 12 months has been availability of land. As operators in a sprawling metro with a temperate climate and a lack of major density outside the downtown area, many of El Paso’s restaurant users found themselves in positions to easily shift to or create new patio space when the pandemic began.

The same applies for drive-thrus. Chick-fil-A was the original restaurant to introduce a double drive-thru, enabling it increase its business without violating social distancing protocols or indoor dining capacity restrictions. Other users like Dutch Bros., an Oregonbased coffee concept, have followed suit. In addition, Chipotle Mexican Grill will open its first drive-thru concept in El Paso at Eastlake Marketplace.

These users are just some of the dozens of quick-service restaurants and concepts that are actively expanding in El Paso. Other examples of concepts that have opened new venues of late include Jamba Juice, Tropical Smoothie Café, Baja Fresh Mexican Grill, McAlister’s Deli, Jersey Mike’s, Nektar, Crave and Hillside Coffee.

Strictly within the River Oaks portfolio, food and beverage also remains the most active category. Across the 10 or so projects totaling roughly 500,000 square feet that we have in various stages of development, we’re targeting quick-service restaurants and concepts that have successfully rolled out delivery, drive-thru pickup and other contact-free services. Examples include Whataburger, Dunkin’, Starbucks, Burger King and Freddy’s Frozen Custard & Steakburgers. Unlike some other Texas markets, new development of brick-and-mortar retail space is still thriving in El Paso, for this is a market defined by consistency rather than turbulent highs and lows. Rarely at any point in the last 10 years has the El Paso retail sector become overbuilt to the point that vacancy has risen or rent growth has slowed to disconcerting levels.

As of this writing, River Oaks is underwriting rent growth for most new deals in our portfolio at pre-pandemic levels. On a marketwide basis, the average asking rent in El Paso currently stands at $25 per square foot for Class A space, relatively unchanged from this time last year.

Outside of the food and beverage space, we see discount retailers like Dollar Tree, Ross Dress for Less, Five Below and DD’s Discounts continue to be aggressive with their site selections. Even amid a global health crisis, the El Paso stores of these users have continued to post robust sales figures that have encouraged their expansion plans. With these tenants behind them, occupancy rates at power centers and smaller shopping centers of new construction have held stable, especially in comparison to occupancy rates for malls and small shops in the downtown area.

Even among major retailers that declared bankruptcy and liquidated some of their assets in 2020 — J.C. Penney, Tuesday Morning, Chuck E. Cheese — the El Paso locations were generally not impacted. Of course, for some of the newer retail product coming on line, these trends are pure economics; construction costs have not declined during this cycle, thus rental rates for new space have not either. But the sustained sales and return to pre-pandemic rent levels also attest to the healthy demand we have in El Paso. Residential growth has continued relatively unabated throughout the pandemic, but even more exciting for our market has been the rapid rise in new industrial development.

To that end, the El Paso business community is ecstatic over the imminent arrival of Amazon, whose fulfillment center is being developed directly across the street from River Oaks’ Eastlake Marketplace. Preliminary reports suggest that the opening of this facility, which like many other Amazon fulfillment centers could span well over 1 million square feet, could add as many as 700 new jobs to the local economy. This residential and industrial growth will only enhance El Paso’s visibility and prominence on a national level, thus elevating its appeal in the eyes of retailers looking to expand. As has always been the case in this market, however, the users that take the time to really develop a deep understanding of the economic and demographic driving forces of our border town will have the most success.