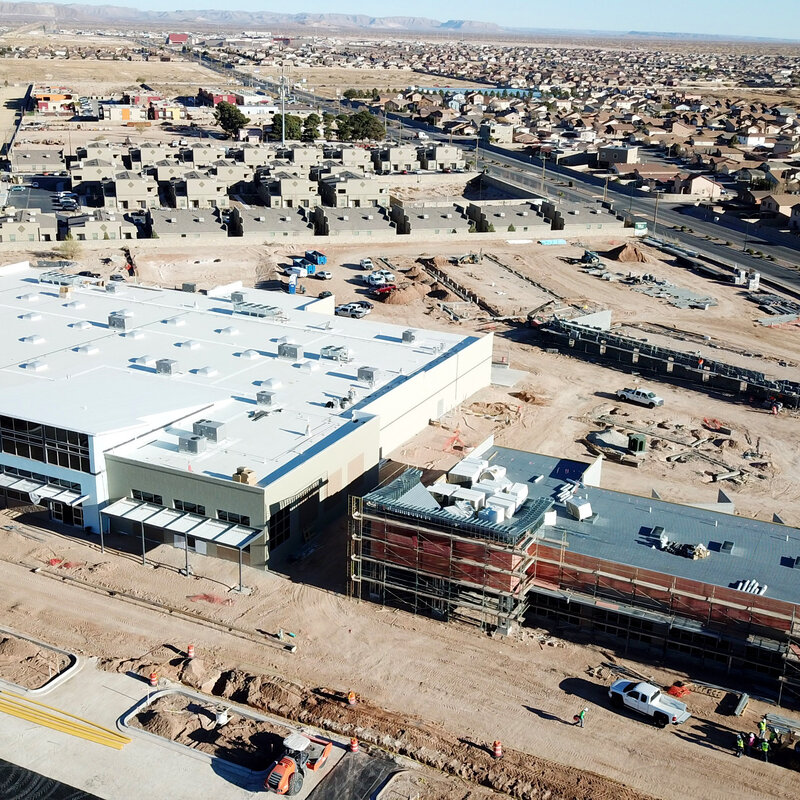 For Keats Southwest, an East El Paso metal-stamping plant that produces millions of small metal parts for factories in Mexico, sales drastically dropped in the early weeks of the pandemic as many factories it supplies slowed or shut production for weeks. Keats had to furlough about 15 employees. Then, in the summer, sales began to come back as factories in Mexico and the United States revved up to make up for lost production, said Matt Keats, company co-owner and president. “In 26 years (in El Paso), probably the last six months have been the best sales months since we’ve been here,” Keats said. “It’s insane.” The company, with 70 employees, has been hiring in recent weeks. It makes parts for motor vehicles, appliances, and other products. However, the current surge in business is in danger of slowing because a shortage of copper and steel materials is starting to become a problem, he said. Copper and steel producers likely slowed production during the pandemic because of decreased orders, and now are not yet ready to supply the new demand, Keats said.

Other manufacturers are having similar problems with material shortages. Manufacturing is one of the sectors of the El Paso economy that weathered the pandemic storm reasonably well. The real estate and construction sectors also have done well. But many small businesses, especially businesses in the restaurant and hotel sectors, continue to struggle as the El Paso economy emerges from the pandemic’s constraints. “In a lot of ways, the economy is in pretty good shape in El Paso, but the labor market still has a lot of weak spots associated with it,” with unemployment not expected to go back to pre-pandemic levels until 2023, said Tom Fullerton, an economics professor at the University of Texas at El Paso and co-author of the newly published “Borderplex Economic Outlook to 2022.” This is the 23rd year for the annual economic forecast. El Paso’s unemployment rate skyrocketed to 14.7% in April when the Texas Workforce Commission, or TWC, estimated about 50,000 El Paso County residents were unemployed. The number of unemployed El Pasoans was still high in January at an estimated 29,700 people, the latest TWC data show. That’s well above the estimated 14,500 people unemployed in January 2020, when the unemployment rate was 4% — two months before the pandemic hit. The El Paso unemployment rate was 7.6% in January, the Federal Reserve Bank of Dallas reported. The national rate was 6.3% in January. Adrian Loera, a bartender and server at two El Paso restaurants, was furloughed for five to six weeks during two different lockdowns last year. “I’m doing much, much better” a year later because Landry’s Seafood House in East El Paso, where he’s been a bartender for several years, has seen business improve, Loera said. And last fall, he took a second part-time job at The El Paso Wing Factory in Central El Paso to boost his income, he said.

Many companies have job openings The El Paso area lost an estimated 14,300 jobs last year, Texas Workforce Commission data show. However, El Paso also has a lot of job openings — something that’s occurred throughout the pandemic, even as businesses cut jobs, said Denisse Arrieta, business services manager for Workforce Solutions Borderplex, this area’s public employment agency. El Paso had just more than 8,200 job openings for a host of companies in the third week of March, according to Workforce Solutions data. “The services sector is hiring the most,” with hundreds of call center jobs available, which include many work-at-home jobs, Arrieta said.

Federal stimulus money helped personal income grow UTEP’s Fullerton said, “The economy was bad in 2020.” But billions of dollars from federal stimulus programs succeeded in helping businesses and the unemployed better weather a rough 2020, he said. The stimulus money also played a part in personal income growing in El Paso County in 2020 even though employment declined — the first time Fullerton can recall that scenario occurring in his more than two decades of producing El Paso-area economic forecasts. “This will be a year of stabilization with fairly slow growth rates” in various economic measurements. “Next year, things could accelerate noticeably. The really good news arrives in 2023, but that’s subject to the caveat that the pandemic doesn’t deepen,” he said.

Nurses give temporary boost to hotels In the early weeks of the pandemic, many El Paso hotels were virtually empty, which forced hotels to lay off hundreds of employees. But occupancies rose last fall above 60% as traveling nurses and other medical professionals began coming to hospitals to help with El Paso’s COVID-19 surge, said Marco Ortega, president of the El Paso Hotel and Lodging Association. National Guard troops apparently doing training at Fort Bliss also have helped to fill rooms recently, he said. “It’s smoke and mirrors. We have the occupancy and it looks good” on hotel reports, but when the traveling nurses start leaving, occupancies are likely to drop again because this area isn’t yet getting the number of business and leisure travelers needed to sustain higher occupancies, he said. Even with the hotel industry’s problems, Ortega knows of at least two hotels under construction in El Paso. Celia Dubrule, general manager of the Marriott El Paso Hotel near the El Paso airport, one of the city’s largest hotels with 296 rooms, said its occupancy rate has risen to 30 to 40% in recent months mostly because of the traveling nurses. That’s still too low to bring back more employees, she said. The hotel has about 25 employees, compared to 89 before the pandemic began. “I do see a light at the end of the tunnel” as more people get COVID-19 vaccines and more businesses begin having employees travel again, Dubrule said. But she doesn’t see business returning to “almost normal until next year,” she said. Ortega said industry analysts don’t foresee travel returning to pre-pandemic levels until 2023 or 2024. El Paso’s hotel occupancy averaged 55.3 percent for all of 2020, compared to an average 75.5% in 2019, and sales declined almost 33% in 2020, according to STR, a Nashville-area company that tracks hotel data worldwide.

Smaller small business community remains ‘fragile’ Many of El Paso’s small businesses are “still financially fragile” with inadequate cash flow because of reduced operations during the pandemic, said Cindy Ramos-Davidson, chief executive officer of the El Paso Hispanic Chamber of Commerce. Many Downtown businesses have been severely hurt by the yearlong crossing restrictions on Mexican citizens at international ports of entry between El Paso and Juárez, which has stopped the flow of Mexican shoppers that many of the small businesses rely on for sales, she noted. Many business were able to get Paycheck Protection Program loans, but some businesses couldn’t do that because their accounting books were not in order, Ramos-Davidson said. Small grants from city and county programs also helped businesses cover some operating costs, she said. “I think the prospects now are very bright in terms of what business can do to revamp, retool and rebuild their company.” Texas Gov. Greg Abbott allowed businesses to go back to full operation March 10, and vaccines are on the street, but it’s still a good idea for businesses to follow pandemic safety protocols, Ramos-Davidson said. A recent chamber survey found 60% of 324 member businesses planned to continue to operate with a limited capacity and continue to require face masks and social distancing despite the governor’s new order. El Paso had 79,378 businesses prior to the pandemic, with just over 80% of those having no employees, including sole-proprietorships and independent contractors, show the latest U.S. Census Bureau data from 2018. Opportunity Insights, a Harvard research organization, estimates the number of open El Paso small businesses decreased 24.8% from January 2020 to March 3, 2021, based on businesses’ financial transaction activity. The number of businesses closed was not reported in its economic tracker. The UTEP Borderplex Economic Outlook estimates the number of El Paso County businesses with employees declined almost 3% in 2020 to 14,644. It projects the number to decrease further this year before beginning to grow again in 2022.

River Oaks Properties and Mimco Inc., El Paso’s two largest developers and operators of strip shopping centers, where many small businesses are located, saw some businesses shut down, officials at the companies said. Both companies helped tenants with deferred lease payments, and guided them to PPP loans and other help, the officials said. River Oaks’ overall shopping center occupancy is healthy at almost 95 percent, with newer centers in growing areas of far East El Paso performing the best, said Adam Frank, River Oaks president. It has several new centers about to open and several in development, he said. Mimco’s vacancies at the end of 2020 were higher than in 2019, “but not as bad as expected” when the pandemic started, said Bob Ayoub, the company’s chief public relations officer. It has two shopping centers in the works in El Paso.

Companies continue site shopping The epidemic didn’t stop big companies from looking and committing to new locations last year. The Borderplex Alliance, the private, El Paso regional economic development organization, had a record year for job recruitment and company expansions in 2020, said Jon Barela, Borderplex chief executive officer. “We expect another strong year for recruitment and business expansion in 2021.” A combination of companies seeking to move operations away from China, low construction loan rates, and this region’s “young and dynamic workforce” are helping recruitment efforts, Barela said.Borderplex takes credit for helping draw nine companies to this region last year, including two manufacturing plants in Juarez, that are projected to create more than 4,000 new jobs over several years. The biggest catches were Amazon’s huge distribution center in East El Paso, which is expected to open this year, and TJX Companies’ planned warehouse and distribution center for its Marshalls clothing stores. The number of companies looking at this region continues to be strong, Barela said. Manufacturing; logistics and warehousing; back-office services, including call centers; and technology services are sectors generating the most interest in this region, Barela said.

Crisis leaves restaurateur stronger For Liem, operating four restaurants during the pandemic “was like a crisis from time to time.” It left those who survived “a little bit more robust, stronger,” he said. “We weren’t making it financially for a while, severely. I had to raise capital for a while, then the government (PPP loans) came in,” which allowed the restaurants to survive, he said.Takeout, a huge portion of his business about three to four months ago, has begun to decline as dine-in customers have increased, Liem said. That’s allowed him to hire more staff. His four restaurants now employ about 70 to 80 people, compared to about 120 before the pandemic, he estimated. “Through all the challenges, we had very supportive guests that helped drive sales and dropped in words of encouragement,” Liem said. “I believe the El Paso community in general was very supportive of suffering businesses.” Vanessa Duran, new president of the El Paso chapter of the Texas Restaurant Association and co-owner of the iconic L&J Café, sees permanent operating changes for many restaurants. Curbside pickup and home deliveries are here to stay for many restaurants, Duran predicted. “We (L&J) never thought to do curbside. Now we have six curbside spaces, and at night they get full,” she said. Many restaurants, especially mom-and-pop operations, went out of business during the pandemic, Duran said. No El Paso estimates are available. But the Texas Restaurant Association estimates 11,000 Texas restaurants closed so far during the pandemic, or 20 to 25% of restaurants in the state prior to the pandemic. “I think it’s only going to get better from here, hopefully,” Duran said. “And that’s if we do the right thing, though. That’s if people still follow the social distancing, the mask wearing. They still need to be consistent and still need to be cautious.” “We passed the danger part, but it will take a few years to get back to where we were.”