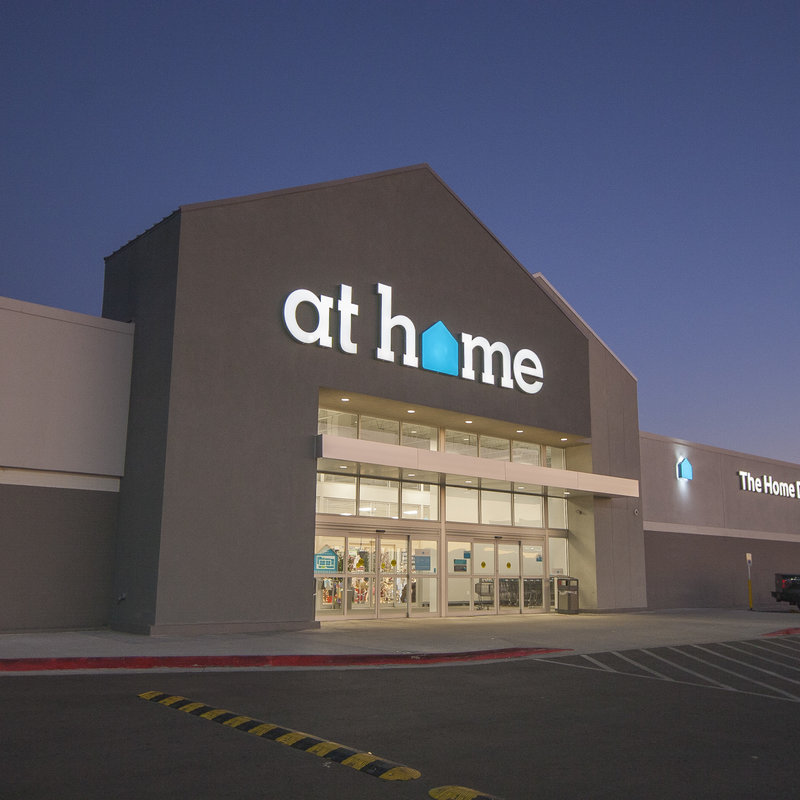 A Sprouts Farmers Market might go into a largely vacant East El Paso shopping center at Interstate 10 and McRae Boulevard, while a closed Kmart store in a neighboring center is being turned into a 100,000 square-foot At Home decor superstore — a new entry in the El Paso retail market.

The At Home store combined with the possibility of a Sprouts across the street “will revitalize an already fantastic (commercial) real estate corridor,” said Adam Frank, president of River Oaks Properties. The large El Paso shopping center developer owns and operates the Eastridge Plaza shopping center where the At Home store will be located.

“We were working with At Home for a long time trying to get them to the El Paso Market,” Frank said. “When the Kmart opportunity presented itself, the deal moved very fast.”

At Home is a Dallas-area-based chain with 133 home-decor superstores in 32 states. It plans to open about 25 new stores this year.

It had sales of almost $766 million last year.

The McRae store will be the first of several stores At Home plans to put in El Paso, according to a company official.

Officials at Sprouts, a Phoenix-based healthy-foods supermarket chain with two busy El Paso stores, are looking at possibly remodeling vacant retail space next to Toys ‘R’ Us in the Eastgate Shopping Center at Interstate 10 and McRae Boulevard for a third El Paso store.

Sprouts officials won’t comment about the possible El Paso store site. But BRR Architecture, a Kansas architectural firm doing work for Sprouts, applied for a city building permit in early June to make what the permit lists as tenant improvements for a Sprouts store in the Eastgate center.

The permit has been reviewed by city staff and is on hold until the architectural firm makes corrections to submitted plans, according to a city official. The permit application was first reported by BuildZoom, a California company that tracks building permits nationwide.

Rick Amstater, a partner in RJL Real Estate Consultants, an El Paso real estate company handling leasing for the Eastgate center, which is owned by a New York developer, said lease negotiations are still in progress with Sprouts.

Amstater said some hurdles still must be overcome in order to complete a deal.

Sprouts — a rapidly growing chain with about 270 stores in 15 states — in early 2016 in the far East Side opened its second El Paso store. That store has been a hit with customers. And its West Side store has been one of the company’s top-performing stores for years.

An RJL brochure for the Eastgate center shows Sprouts as a possible tenant. The brochure also shows a revamped shopping center exterior, which would be done as part of the proposed Sprouts deal, Amstater said.

The Eastgate center has lost several tenants in recent years: Walgreens, which built a store across the street, Big Lots and Office Depot. Besides Toys ‘R’ Us, a Chuck E. Cheese pizza restaurant, United Bank of El Paso del Norte branch and a Cricket wireless store are in the center.

Meanwhile, in the Eastridge Plaza shopping center, across the street from the Eastgate center, interior and exterior demolition work is underway to turn the former Kmart store, which closed several months ago, into an At Home store.

The store is expected to open in the fall and employ about 25 people, an At Home official said.

At Home stores have more than 50,000 home products, ranging from sofas and mattresses to pillows and kitchenware, according to the company.

More than 80 percent of its products are private-label brands that At Home develops directly with manufacturers. About 400 new products are brought in weekly to its stores, according to the company.

The center has a Family Dollar, Gold’s Gym and outlying buildings with Walgreens, Brake Masters and Payless Shoesource.

River Oaks is looking for a national tenant to replace Payless, whose lease expires this year in an about 6,000-square-foot building, Frank said. Payless has closed hundreds of stores nationwide in recent months, including several in El Paso, as part of its bankruptcy restructuring.

Both the Eastridge and Eastgate shopping centers “are fantastic properties in A-plus locations that just needed some new tenants,” Frank said.